Finally, a new blog post. You might have noticed that the last post dated October 24, 2016, just appeared as well. That is because it was somewhere within the website but I did not know how to get it up front. Now with the help of my friend Serenity, I can finally post items again – and learn how to do this myself. Maybe. The photo on the blog page is of Annapurna in the Himalayas seen from Ghorepani 2015.

So, where am I now and what are my hopes for the coming year? For one thing, I am holed up for the winter in a lovely little apartment in Bellows Falls, VT, overlooking the Connecticut River valley, a dam, a canal, and a railroad switch yard. I have my art material out and am working on things on my table which looks out over that view. The trains are so cool. Beyond the yard and train station is a big hill.

What things am I working on? Firstly, I am continuing to build up outreach for my book (Tiger, for short) as a start. That involves reaching out to book stores, schools, etc., with the help of my publisher but also through social media. It also means carrying a book or two around. I sold two in a local diner.

Secondly, I am working on two directions in a follow up to Tiger. Right now there are two possibilities. One is a follow up on what Anjali’s grandfather did when he was a young shaman. There is a story ready, plus preliminary sketches for “Grandfather.” The other is a follow up to what was suggested to me by the Wildlife Institute of India about another tiger conservation story. You read about the latter in my October blog. It is a long way off right now, since it is my hope to raise funding to return to India and Nepal in 2017 to work on that, like Tiger, right there on the spot.

Another direction I am taking right now in my little winter hermitage is appropriately to immerse myself in the Vermont landscape and work towards the publishing of the book on the mountain that I started back in 2009. This includes practicing both watercolor technique (the unforgiving medium) as well as figure studies. There will be a lot of studies of woods scenes as well. Then there will also be the refining of the story itself. That is 50% done. But it is really exciting to be doing this as long as I can keep at it. This story is akin to the theme taken up in the book Last Child in the Woods by Richard Louv. That book did not inspire the idea, but it falls within the same challenge of finding story lines about how we fit into our natural environment that can be made into a children’s book. In addition to the book itself, the artwork that comes out of my hermitage, plus other earlier work related to this and to Tiger, will be the focus of a show I am hoping to pull together for a local gallery here. Here is an older image along the theme of the mountain book. What you can probably not read behind the girl is about the birds she hears around her. 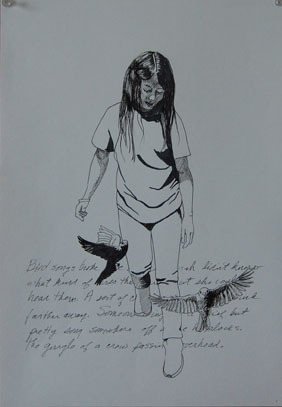 That show will be in May, so I had better keep my nose to the grind stone. One of the themes in the mountain book is thunder. Here is a snippet from the ongoing draft text. Sarah is the original model for the story’s heroine :

“Suddenly clouds pour in overhead, now light gray and white but there are darker rain clouds behind them as the wind picks up. Distant thunder echoes in the valley. It is getting darker. Big rain drops begin to fall with a sound on the leaves like ripples in a stream – a chorus, each drop its own little song, millions of them singing. A smell of wet leaves passes her nose. Raindrops hit her arms. Just as suddenly as it came, the rain stops and the forest is lit up by bright sunlight. A robin chirps nearby. A limb falls in the forest making a suspicious sound. Somewhere there must be a rainbow, but the trees block it. Sarah thinks that maybe she can climb a tree and see the rainbow.”

Why is it hot and dry? Two curious Nepali girls embark on a search for answers in a jungle near their home. Did Tiger take the rain?

Far away in Vermont, on a cool but colorful, sunny October 14 I picked up my first box of Did Tiger Take the Rain? – virtually on the doorsteps of Green Writers Press’ office and home near Brattleboro.

I took out a copy for myself right there and held it to my heart. I thought of the trips, the hard work, the sad times and the joy – of days in a jeep, the villages and the wonderful people I met there and those at home who supported, advised, and believed as I put my book together. And now the book is out there. I hope it will be an accessible tool for beginning a conversation on climate change which is equally thought-provoking for children, parents, and teachers.

During the ongoing Brattleboro Literary Festival, I signed my first book: one dedicated to a granddaughter named Kathryn. Kathryn, may Tiger forever be your friend and may you and those of your generation understand Anjali’s message: “When the sun shines, it shines down on humans and tigers together.”

The official book launch was November 11, 2016, at Everyone’s Book Store in Brattleboro, VT. Great questions, and some wonderful kids who, like the adults, were pressed to find the three hidden tigers in the book. Here is a photo. It shows me, two of the kids, and fellow writer Jaimie Scanlon and illustrator Ellen Tumavicus along with their book Ralph Flies the Coop which has been published by Green Writers Press parallel to mine. 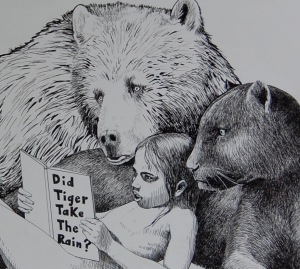 This is a pen and ink drawing that shows Mowgli from Rudyard Kipling’s The Jungle Book as best as I could render him based on Kipling’s original concept. It is akin to the fantastic images drawn by Robert Ingpen in his illustrations for an edition of that book. Kipling spent some time in India and collected material from an area in Madhya Pradesh through which the Seeonee River flowed. He used that information to model the setting for The Jungle Book. By coincidence, during a visit I made to the Wildlife Institute of India in 2015, I was asked if I would be interested in writing a follow up to Did Tiger Take the Rain? based on the re-introduction of tigers into the Panna Tiger Reserve. The Panna and Pench reserves abut the Seeonee region Kipling used as his backdrop for Mowgli, Bagheera and Baloo and the Seeonee Wolf Pack in The Jungle Book. It is my dream to return to the Panna and Pench Reserves in India as a follow up to my book. And if the Mowgli story were not coincidence enough, Kipling actually wrote The Jungle Book in his then home near Brattleboro, Vermont  where Green Writers Press is located. Let’s hope that the tiger of my book is a modern, safer cousin of the ill-fated Shere Khan.